Downtown Atlanta is the first and largest of the three financial districts in the city of Atlanta. Downtown Atlanta is the location of many corporate or regional headquarters, city, county, state and federal government facilities, sporting facilities, and is the central tourist attraction of the city. The largest financial district also contains striking architecture that dates back to the 19th century while maintaining a modern look and feel. Finally, the area is also the location of the hub of MARTA rail lines and where the major Interstates meet each other with two of them forming the Downtown Connector.

As defined by the Central Atlanta Progress (CAP) organization, the area measures approximately four square miles, and had 23,300 residents as of 2006.[1] This area is bound by North Avenue to the north, Boulevard to the east, Interstate 20 to the south, and Northside Drive to the west. This definition of Downtown Atlanta includes central areas like Five Points, the Hotel District and Fairlie-Poplar and outlying inner-city neighborhoods such as SoNo, and Castleberry Hill.

The Atlanta Downtown Improvement District (ADID) organization, though, defines a much smaller downtown area measuring just one and two tenths square miles. This area is roughly bound by North Avenue to the north, Piedmont Avenue and then Downtown Connector to the east, Martin Luther King Junior Drive, Courtland Street, and Edgewood Avenue to the south, and the railroad tracks to the west. This area only includes the core central business district neighborhoods of Fairlie-Poplar, Five Points, the Hotel District, Centennial Hills, and as of May 2007, the Railroad District.

The Downtown area is one of the most active business districts in the Atlanta Metropolitan Area. The daytime population swells to over 140,000 as of 2006. Downtown brings in more than 12 million visitors annually. Finally, Downtown boasts more than 12,000 hotel rooms, 185 restaurants/eateries and 30 bars/nightclubs.

Downtown Atlanta, like other central business districts in the U.S., is undergoing a transformation that includes building condos and lofts, uninhabited buildings being renovated and/or demolished, and the influx of people and businesses coming to the area.

Downtown Atlanta is the historic core of the city. The beginnings of what is currently Downtown Atlanta began in 1826 with Wilson Lumpkin and Hamilton Fulton surveying a possible railroad route between Chattanooga, Tennessee and Milledgeville, the state capital at the time. In 1833, Lumpkin, now governor, requests that the state legislature charter three railroad lines. By 1836, the state-financed Western and Atlantic Railroad, linking the middle Georgia to the northern U.S., was founded by the legislature and signed by Lumpkin. As a result, the town named Terminus is founded in 1837, which is named for the end of the railroad line.

Terminus received a name change in 1842 when the town's 30 inhabitants voted to change the town's name to Marthasville, in honor of Governor Lumpkin's daughter, Martha. By this time, Marthasville was a growing town with seven streets. Residents in 1844 turned down the town commissioners proposal to build more streets and were satisfied with the town's seven original streets.

By 1845, John Thomson, chief engineer of the Georgia Railroad, suggested that Marthasville's name be changed. The first suggestion was "Atlantica-Pacifica" but was quickly shortened to "Atlanta." Atlanta was derived as a supposedly feminine form of "Atlantic." The name "Atlanta" becomes popular and town's name changes. In 1847, Atlanta is incorporated with its new name, with the town limits a one mile (1.6 km) radius away from the mile marker at the railroad depot. (The zero milepost marker is located under the Central Avenue viaduct between Alabama Street and Wall Street.) After the incorporation of Atlanta, a movement began to move the state capital from Milledgeville to Atlanta. 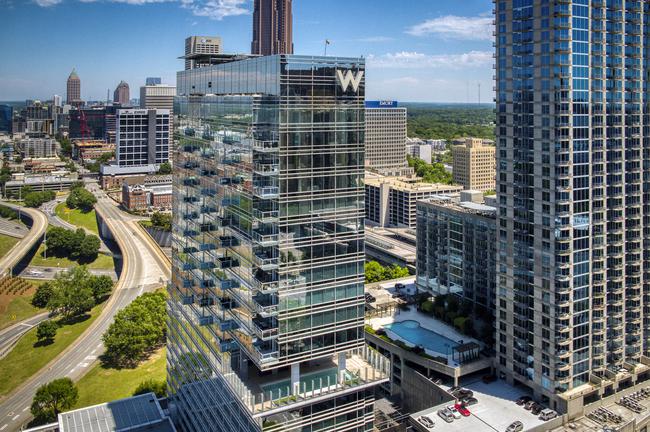